There’s an Elephant in the Park !!

All that we are asking for, at Pipistrelle Art, is a dry weekend without too much wind! (I’ll go easy on the Friday night curry and go heavy on the Rennies). No, not that type of wind!! the sort that destroys tents and carries away gazebos! It’s that time of year again when folks descend upon the spa town of Leamington to enjoy the Art in the Park Festival. Fantastic talents on show, from stonemasons, stained glass and portrait artists to great food, good music and there had better be some fine cider knocking about or I’ll cry!

We’ve been there a few times, as visitors at the festival, but this is the first year we will be exhibiting our own wares. Super-excited!! Set in the stunningly beautiful Jephson Gardens at the bottom of the parade and running alongside the river it’s a cracking setting and a great few hours out.

But it got me thinking that I didn’t know much at all about where we would be displaying, so, I thought I’d do a little research; believe it or not this involves elephants-yep, you heard it right, big grey wrinkly elephants….oh and Black Sabbath…

The gardens themselves were originally laid out in 1834, taking them from farmland to parkland of just over 10 ½ acres. You could get in for free if you rose early. Entry between 7am and 10am didn’t cost a single shilling but after mid morning you had to pay or be a user of the local Bathhouse. The gardens were duly expanded until the current size as well as an aviary, tearooms, tennis courts (which were removed do to the ‘Dig for Britain’ campaign during World War Two.) Activities in the park were many and varied, in the early years, including balloon flights, fireworks and fairy lights, croquet, archery and flower shows which drew from people all over Britain. Concerts were held in the park of traditional and brass music and on 17th of May 1970 a certain four-piece band, led by Ozzy Osbourne, performed at the Pavilion in the gardens as part of the Black Sabbath world tour… But what of the elephants? 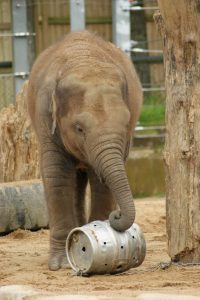 Baby Elephant playing with a barrel

The Leamington Spa elephants were in the care of a Mr Samuel Lockhart, a foremost elephant trainer of the day who would travel the world with his pachyderm pals accompanying the likes of Barnum and Bailey, Ringling Brother’s Circus and even Buffalo Bill’s Wild West Circus. He had up to a dozen of the animals at a time but nobody seems to know where the full grown elephants were housed. His ‘baby’ elephants, as he called them, were kept in an old coaching house in Morton Street in the town. They were often seen being walked through the streets down to the River Leam where they were washed and watered in the flowing current. When other circuses were in town they would also join these watering rituals in the river. The Elephant Wash Ramp, as it is now known, is on the opposite bank to Jephson Gardens next to the Mill Road footbridge. Round and about town there can be found various references to Sam Lockhart and his elephants, just take a wander and see what you can find.

I doubt there will be any real elephants splashing in the river on the first weekend in August, but there will be hundreds of visitors to the Art festival. So why not be one of them and come and see the varied talents and skills of artists and craftspeople? It is a great excuse for a day out or, should you be an art collector, a great chance to discover more pieces to add to your collections and make new acquaintances.

Of course, don’t forget to visit us at Pipistrelle Art where you will be greeted warmly (especially if there’s any cider on the go) and perhaps find out a little more about us and what we do.

Looking forward to seeing you all there.