A Weird and Wonderful Christmas – 2019 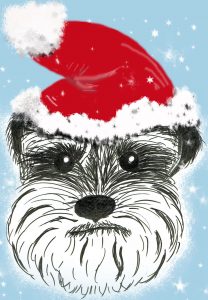 The ‘wheel of the year’ has certainly spun quickly over the last twelve months – it only seems a matter of a few weeks since we wrote the last Yule blog here at Pipistrelle Art. Wouldn’t you agree? We trust and hope you’ve all had a great year, you lovely folks.

So how about some weird and wacky facts about Christmas and that red-suited old dude, Santa himself. So, to kick off, lets start with that jolly old fellow….

How quick do you reckon the old boy is? He’s got one night to shift a heck of a lot of gear so how does the pensionable Santa and his team of Christmas elves and reindeer manage it? Apparently, by travelling at 650 miles per second and scooting down 822 chimneys in each second as well. For a chubby chap that sure is moving some…. He hurtles around using various pseudonyms – in Italy he is La Befana, Kriss Kringle in Germany and Deushka Moroz (Grandfather Frost) in Russia and cold Siberia. This guy doesn’t use Amazon or sub-contract couriers he’s one man on a mission. Hats off to Santa Claus!!

Mistletoe. Much revered by the Druids and with links to the Old Norse Gods, the name actually comes from the Anglo-Saxon word ‘mistletan’. The meaning of which is ‘little dung twig’ because the plant looks like and is spread by bird poop!! Kiss under this at your own peril… We decorate with holly and ivy because it represents immortality – the holly also linking to Christ’s crown of thorns.

How about that misery Oliver Cromwell? He banned Christmas for a few years until letting folks celebrate again in 1670. In fact you shouldn’t be eating those good old mince pies on Xmas Day either. Cromwell passed a law to not eat them mincies or Christmas pudding on that day and this law has never been rescinded. So, keep the curtains closed, shut all the doors and hide under the blankets and indulge in the sweet treats, don’t let the food police in! In some traditions, though, you should be chowing down on the mince pies for the Twelve Days as this will bring you good luck….just don’t get caught!

According to a major high-street retailer over 80% of people own a Festive jumper or shirt with 3/4’s being bought for a ‘work’s do’. Half of all owned Christmas jumpers will be worn on the Day itself. Over on our Shop we have psychedelic, doggies, Yule and other cool designs for Xmas and beyond ready for next year??!!

Okay then, so what’s your favourite Christmas song? The best selling song of all is Bing Crosby’s White Christmas, whilst in the UK Band Aid hold the highest-selling single spot. But who earns the highest royalties from these seasonal ditties? Mariah Carey earns around £375,000 for her Christmas warblings. Paul McCartney gets £250,000 for his Christmas durge, which many think to be the worst song he ever penned. But, it’s the mighty Slade with Noddy Holder who bring home a half a million quids worth of bacon every year from Merry Christmas Everybody. That’s a whole lotta bacon to wrap around a whole lotta sausages…..pigs in blankets hhmmm…

Speaking of food…. Did you know that the Japanese eat at KFC on Christmas day thanks to an awesome advertising campaign over 40 years ago, being so popular, orders have to be placed 2 months ahead!! Not to be outdone in the poultry stakes, 10 million turkeys will be cooked over the festive period in the UK alone. And this will be swilled down with 57 Olympic sized swimming pools full of beer! With Xmas puddings making up £48 million of the food budget alone….

So, there we go, you lovely folks, a little look at the weird and wonderful world of Christmas or Xmas (Xmas is okay as X is Greek for Christ), we hoped you enjoyed this sojourn into the festive season.

Pipistrelle Art would like to wish you, one and all, a Merry Christmas, Happy Xmas, a Joyful Yule and an enjoyable Holiday Season however you wish to celebrate this time. Remember where we are both in person and online and social media, we’d love to here from you!!!